I used to have our blog at a different site which ended terribly as I deleted it by accident and there was no way to retrieve it.  It was a sad death to a very young blog.

But I came across some images that I took and blogged about on the other site that I thought I could share again since I may be the only person who remembers the other blog!

I was able to go to the Tokyo Gift Show a couple of years back and came across some really fun stuff.  If anyone has been to Japan, you know that the stores are filled with fun, cute (KAWAIIII!!!!!!) things and then other things that make you say, “Huh?” 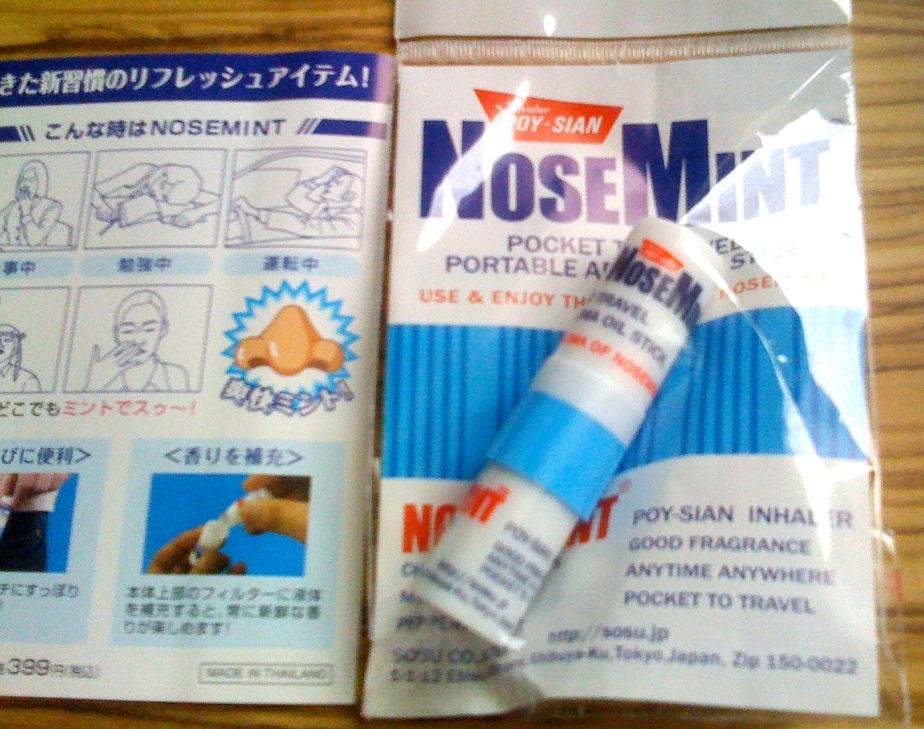 This product is called Nose Mint.  Now, the point of it is that you stick it under your nose and take a whiff if you are faced with any of the following situations according to the package:

1. You’re bored at work
2. You’re pulling an all-nighter
3. You’re falling asleep at the wheel
4. You’ve been out drinking with your co-workers, you got a little too inebriated and tied your expensive Paul Smith tie around your head so you can belt out the Carpenters or the Beatles at the final Karoke bar stop and you ran to make the last train out of Roppongi to your house in the outskirts of Tokyo and it will take at least an hour but you have to make sure you stay awake so that you don’t miss your stop or else you’re going to call your poor wife to ask her to come get you and trust me, she won’t, so you may have to end up sleeping on a bench at some station far from your house….

All very common ailments that would require sticking nose mint to your nose for a little perking up!  And trust me, it’s potent!!!  That park bench will have to house some other poor schlub who couldn’t shell out 399 yen for some peace of mind.

Now, my ability to read Kanji is pretty rusty so I’m not really sure why you would put the nose mint on the inside of those masks that people wear to prevent getting or giving germs but I imagine it’s to act as a decongestant a la Vicks Vapor rub.  Or else, you just want to shock your system into a reboot mode.   I can’t imagine wanting this Nose Mint thing clamped to your nose for any extended period of time.