I forgot to add the pictures from the University of California digital archives!  Here they are: 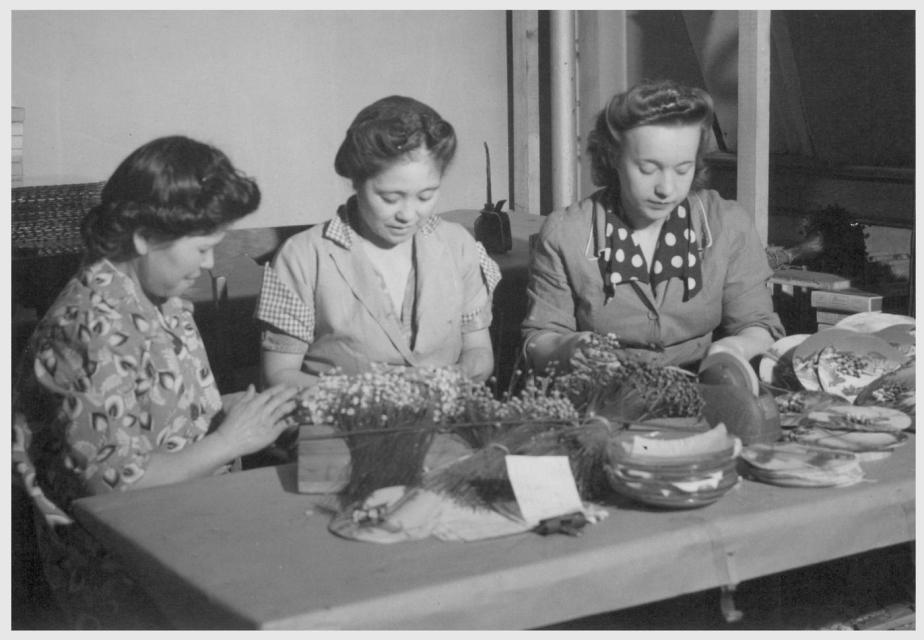 These three women, two of them Issei resettlers, are assembling artificial flower novelties in a workroom of the Miya Flower and Novelty company, New York City. The resettlers are Mrs. H. Tamaki (left), formerly of Covina, California, and the Heart Mountain Relocation Center; and Mrs. M. Kiyam, formerly of Los Angeles and the Jerome Relocation Center. The shop in which they and ten other evacuees are employed is owned by Chosuke Miyahira, who started the business in 1937. — Photographer: Ishimaru, Stone — New York, New York. 3/?/45

Otozo Iwatsu, Issei, a former resident of San Francisco and the Central Utah Relocation Center, is now employed by the Miya Flower and Novelty Company in New York City, where he is shown sorting straw flowers. Mr. Iwatsu is one of 12 evacuees employed by the company, which is owned by Chosuke Miyahira. He started the business in 1937. Mr. Iwatsu relocated to New York City in January 1942 with Mrs. Iwatsu and their 17-year-old son David, who now attends Stuyvesant High School there. The Iwatsus have two other sons, John, an architectural draftsman, who preceded his parents to New York from Central Utah in October, 1943; and Peter, a first lieutenant in the Engineer Corps, U.S. Army. Mrs. and Mrs. Iwatsu owned a restaurant in San Francisco prior to their evacuation in May 1942 to the Tanforan Assembly Center. In September 1942 the family went to Central Utah, where Mr. Iwatsu was employed as a second cook. — Photographer: Ishimaru, Stone — New York, New York. 3/?/45